The twists and turns in the Sushant Singh Rajput case would outfox even the most skilled of Bollywood’s storytellers. The death of the 34-year-old actor at the height of his popularity stunned the country. His fans thought it was a suicide brought on by immense inner mental torment, an affliction he hid from the world. Then, as the drama unfolded amid a pandemic and a lockdown, an army of warriors started playing detective on social as well as conventional media. These self-appointed sleuths first billed his death as an outcome of the “movie mafia” in Mumbai filmdom, denying talented outsiders such as Sushant their due. Then, after an unexplained hiatus of 40 days, Sushant’s family alleged foul play. The spotlight then shifted to Sushant’s girlfriend Rhea Chakraborty and her family, whom Sushant’s father Krishna Kishore Singh accused of siphoning off Rs 15 crore from his account and having abetted his suicide. In between, a convoluted potboiler began to simmer, one involving the death of Disha Salian, Sushant’s manager briefly, a few actors and a political battle between two states and their police machinery. Suddenly, the word ‘murder’ began doing the rounds. On August 19, the case took its most dramatic turn when the Supreme Court, acting on Rhea’s petition challenging an investigation by the Bihar police, handed over the probe to the Central Bureau of Investigation. The CBI must now find answers to the questions that have haunted headlines more than two months after Sushant died. 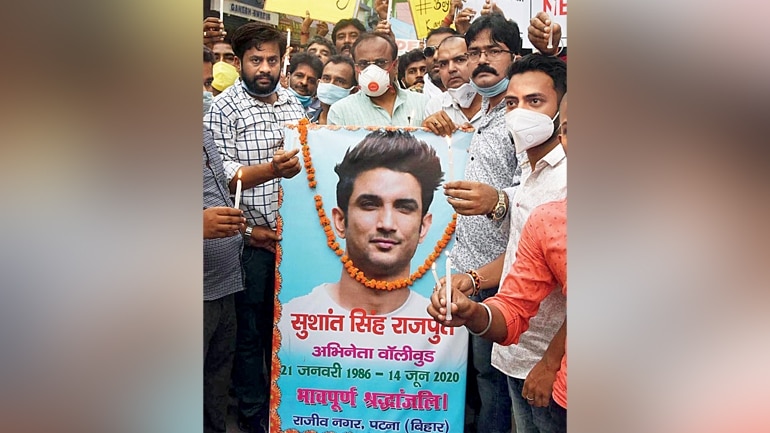 What is the evidence that Sushant took his own life?

Nothing on June 14 suggested that the day would be any different for Sushant, who stayed on the sixth floor of a duplex apartment in the Mount Blanc housing society of Bandra in Mumbai. Around 8 am, he asked his domestic help Neeraj for a glass of cold water. For breakfast, he asked his cook Keshav to give him coconut water, juice and bananas. He didn’t have the bananas. When Keshav went to ask him around 10 am what he wanted for lunch, he found the room locked. Assuming that Sushant wanted to sleep till late, everyone let him be. But when the actor did not open the door or answer the calls of Siddharth Pithani, his creative content manager and flatmate since January 2020, the staff grew concerned enough to hunt for a key and alert Sushant’s sister Meetu, who lives in Mumbai suburb Goregaon, 16 km away. They decided that the lock had to be broken. Around 1 pm, a local locksmith broke the lock to the door. But rather than go into the room immediately, Pithani paid the locksmith Rs 2,000 and saw him off. He then came back, and went into Sushant’s room, with house manager Dipesh Sawant and Neeraj following him. It was then that they found Sushant hanging from the ceiling fan.

Pithani says he brought the body down, severed the green kurta Sushant had used to hang himself and tried to revive him. Sushant’s sister Meetu, too, had reached by then. There was no suicide note, a fact that has fuelled some controversy. The Forensic Science Laboratory (FSL) in Kalina ruled out homicide in its report as nothing in the samples suggested foul play. FSL sources say the “tests of nails and the stomach wash showed no struggle or poisoning, respectively”. The post-mortem report reached a similar conclusion, listing the cause of death as “asphyxia due to hanging”. Based on the half-open eyelids, secretion of semen on the shorts, the viscera report and the contents of the stomach, the forensic experts concluded that there is no foul play.

However, on July 25, almost six weeks after Sushant’s death, his father K.K. Singh filed a complaint with the Patna police, stating that he suspected foul play. The family’s advocate, Vikas Singh, outlined the family’s reasons for suspicion. For one, they characterise Pithani’s behaviour with the locksmith as peculiar. “Normally, you would open the door first before seeing the locksmith off. Why was he sent away first?” he asks. Singh cites other alleged inconsistencies in the Mumbai police probe following the actor’s death. The Mumbai police say Sushant climbed on to his bed to hang himself. Singh argues that at six feet, Sushant was tall enough to touch the fan if he stood on his bed. According to him, when people want to hang themselves, they stand on a stool, slip the noose around their neck and then fling the stool away. Sushant, Singh adds, would have had to be in an inclined position to hang himself; even so he’d still have the support of the bed.

Dr Harsh Sharma, director, State Forensic Science Laboratory at Sagar, Madhya Pradesh, who has investigated over 800 suicide deaths, dismisses his claim. He told YouTube channel Crime Tak that once the noose is tied around the neck and connected to the anchor point, whether a person is standing, sitting or kneeling, the neck is compressed and all impulses to the brain are cut off, sending the body into a state of paralysis. The lack of bruises and abrasions on Sushant’s body and the half-open eye were typical of suicidal hanging, he added.

Did Sushant suffer from a serious mental disorder?

Sushant’s family now even questions the Mumbai police’s initial conclusion that the actor had a serious mental illness that could have led to him taking his life. That Sushant’s interests extended beyond cinema is well-established. On his Instagram, one was more likely to find nuggets on his progress with 50 dream projects, navel-gazing or insights on astronomy than film-related posts. What would push a man with so many interests to take this tragic step?

Rhea Chakraborty, who describes herself as his “live-in partner”, believes Sushant had been suffering from a serious mental disorder for the past eight months. She recalls that she first noticed it when she, Sushant and her brother Showik had taken a trip to Europe in October 2019. Rhea told officials investigating the case that the first episode occurred in a hotel room in Florence after they had seen the Goya painting, ‘Saturn Devouring His Son’. Sushant, she said, was shaken and had hallucinated over the next few days. His condition got serious enough for them to cut short their trip. Between November and December 2019, Sushant and Rhea consulted Mumbai-based clinical psychologist and psychotherapist Dr Susan Walker Moffat, who diagnosed the actor as having a bipolar disorder. In a video statement shared with YouTube channel Mojo Story, Moffat said Sushant was “suffering terribly during his bouts of depression and hypomania”. Moffat was one of at least four doctors Sushant reportedly consulted till March 2020. Rhea also revealed that she consulted Moffat for her own battle with anxiety and panic attacks.

In an August 1 interview to Aaj Tak television channel, Sushant’s help Neeraj said the actor appeared to be ‘down’ ever since returning from his Europe trip. He also said that no party took place on the night before the suicide, as was alleged in some circles; Sushant barely stepped out during the lockdown……Read More>>

How to link Aadhaar with mobile number, if you have still not linked SIM to UIDAI card

I am Diploma civil engineer having experience in Building,Industrial projects. As a project Manager/Civil, I am working now in Suven Pharma.Ltd at Visakhapatnam -AP I am in search of job.I can go at anywhere in India.

Hi, I hope you are doing well. I want to contribute a guest post article to your website that may interest your readers. It would be of high quality and free of cost. You can choose the topic of the article from the topic ideas that I'll send you in my next email once you approve this offer. Please note that I will need you to give me a backlink within the guest post article. Please let me know if I shall send over some amazing topic ideas? Regards, Lindsay Johnson

My question If availing moratorium for another two yrs does we have to pay interest as well like in incured in past 6 months moratorium from march 2020 till august 2020 on HL, PL and Cunsomer loans. And Does in this restructuring we dont have to pay loan emi for 2 yrs or emi will be lowered.

My question If availing moratorium for another two doea we have to pay intrest like in incured in past 6 months montorium from march 2020 till august 2020. Does in this restructuring we dont have to pay loan emi for 2 yrs or emi will be lowered.

Margaret B Jones - How to Cancel Amazon Orders

My computer has been offline for a day or so and now I can't get back on Amazon. What can I do? Please help.