New Delhi: The Government on Friday unveiled a reward scheme for those who report benami transactions, according to a new circular by the Income Tax Department. Under the “Benami Transactions Informants Reward Scheme, 2018”, individuals will be able to earn up to Rs one crore for providing specific information to the joint/additional commissioners of Benami Prohibition Units (BPUs). The objective of the scheme is to engage public to reduce black money and corruption from the system.

“This reward scheme is aimed at encouraging people to give information about benami transactions and properties as well as income earned on such properties by such hidden investors and beneficial owners,” it added. 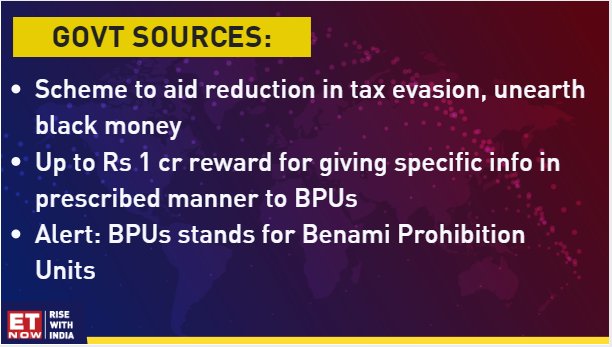 The notification released by the tax department read: “The Benami Transactions Informants Reward Scheme, 2018 (hereinafter referred to as “the Scheme” for brevity) is hereby introduced for regulating grant and payment of reward to a person who is an informant under this Scheme. A person can get reward up to Rs. One crore for giving specific information of benami property. The identity of the informant shall be kept confidential.”

“As per the Prohibition of Benami Property Transactions Act, 1988, as amended by Benami Transactions (Prohibition) Amendment Act, 2016 (hereinafter referred to as “the Act” for brevity), any property acquired by a person in the name of a benamidar (other than his close family members or in fiduciary capacity), is liable to be attached and subsequently confiscated and all persons involved in such benami transactions are liable to be prosecuted which carries rigorous imprisonment for term up to seven years,” it added.

The reward scheme, details of which were announced today, has been made applicable with immediate effect to fetch more information about benami transactions that manage to slip the tax department’s lens.

“The scheme shall regulate grant and payment of reward to informants for giving specific information of benami property,” it said.

According to the notification, the identity of the informant and the information provided by the individual or the reward paid will be kept confidential with the exception of sharing them at a court of law if required. Not just Indians but foreign nationals are also applicable to report benami transactions by contacting officials at CBDT, North Block, New Delhi or via an email to member.inv@incometax.gov.in.

This is a major step by the government in further cleansing benami and illegal black money transactions or properties. While the investigative wings of the government have launched massive crackdowns on offenders since 2015, this scheme will provide more eyes to spot illegal financial activities.

What Is Balance Transfer On Credit Card And How Can It Be Used?

What if your cheque bounces? Check out the legal obligations

This is the very wired News. We have been purchasing from the Big Bazaar since a long time never had such problems, Cloth bag is serious very strong and durable.They always inform at the counter while billing.If you require a bag and if you do it would cost additional.